The Car industry and the cost of Oil 

Click the different values to calculate the gross Cost (just imports) in Billions of $AUST :   Future
Future Cost of imports with no local production in Billions (virtually nothing by 2030) :   Future
Select the price of a barrel of Oil.Change the Aust dollar compared to US dollar.

Note: These calculations are simplified for ease of understanding. It's purpose is to make a point that the bill has gotten big and is getting bigger.

According to the DFAT document Trade at a glance 2011, our top 3 imports were; 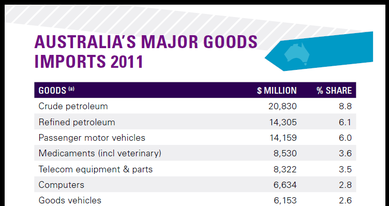 I believe that if Australia as united entity decided together that we should switch to Electric vehicles, we could eliminate sending 10's of billions of dollars per annum to foriegn countries, save car manufacturing by ramping up Toyota's production and avoid a possible iminent Oil supply/demand crash.

If we made and purchased electric vehicles such as the Toyota Camry Hybrids (note), we could substantially reduce our third biggest cost, importing cars.

(Note: Personally I think Plug-in Hybrids are significantly better than current Hybrids, or better yet, all electric.)

However, well before then, the price of petrol will be well over $2 per litre and we will have spent a huge amount of money importing oil.

Every car manufacturer is making, or planning to make an electric car or hybrid. This in itself should tell you something. (see Peak Oil, read more...)

If you own a large petrol vehicle and live in an outer suburb with no public transport, after 2020 you have a problem. Your vehicle will be what is called "a stranded Asset" (low resale value). And your fuel bill will get much bigger.